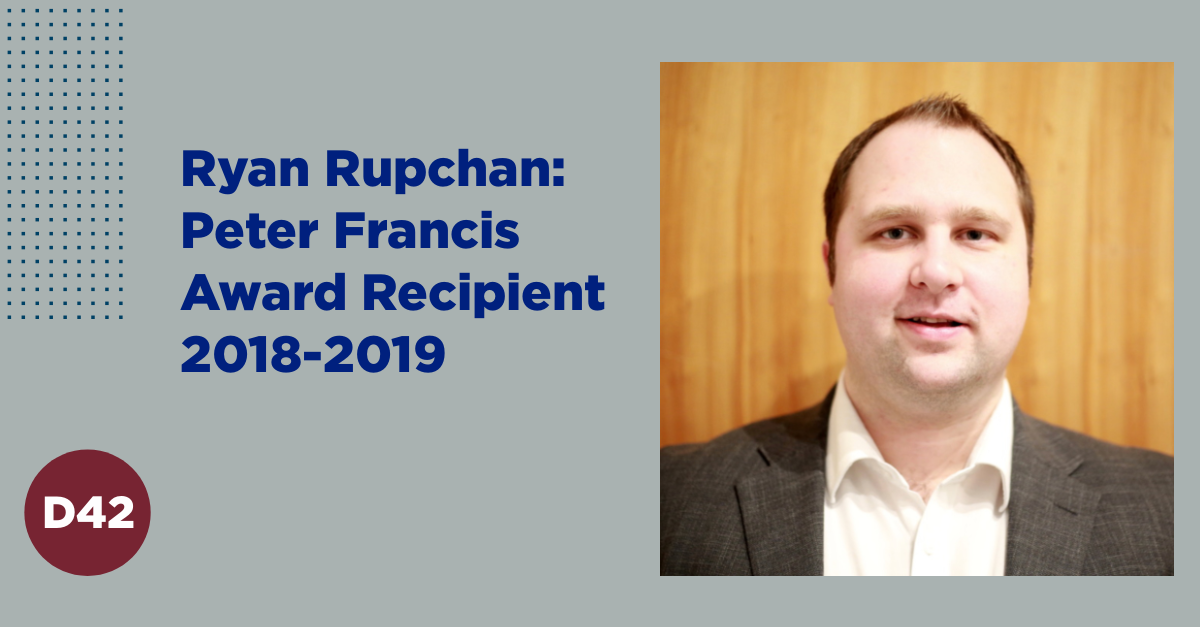 The Peter Francis Award was presented to Ryan Rupchan on December 1st, 2018. Division B Director Laurel Wingert did the honours. The Ramada Hotel in Regina was well attended by the District 42 leaders for another event that day.

Dunstant Taylor DTM told Ryan: “You are excellent team member Ryan. I am so happy and proud of you for this award, because you focus on members’ needs through your service to the district. Way to Go.”

The Award was initiated by Division B in 1991 in the name of the late Peter Francis DTM of Regina, to recognize the contributions he made to Division B.

Mr. Francis joined the Plains Toastmasters Club. He became involved in many areas. In like manner he was an instructor for public speaking at the University of Regina. As well he was both a Scout Leader and a Regina Commissioner in the Boy Scouts of Canada. Also, Mr. Francis served as a Team Captain in the United Way of Regina.

Chatting with Ryan, he gave an insight to his life.

He joined when he graduated University and his first assignment was to develop a presentation. In light of this challenge he researched and found that Toastmasters educated members in communication and leadership skills.

In Ryan’s words: “Toastmasters gives you the opportunity to challenge yourself in a supportive learning environment so you can build confidence in solving problems you didn’t anticipate and navigate through new challenges.”

More importantly, Ryan sees the Award as an honour. Furthermore, he recognizes this honour as a duty to mentor and serve future leaders just as he was.

If not for his mentor, Ryan would’ve given up on Toastmasters during his first year of joining his club.

Mentorship is an important part of Toastmasters Internationals’ education program. Of substance it’s vital to not give up on our mentees.

Mattering much, mentors see something we as Toastmasters don’t always see in ourselves. In the same fashion, we should all be the mentors we would like in our lives.

Once again, the heartiest of congratulations to Ryan! On behalf of the District Executive team, we thank you for your services, support, striving for excellence.