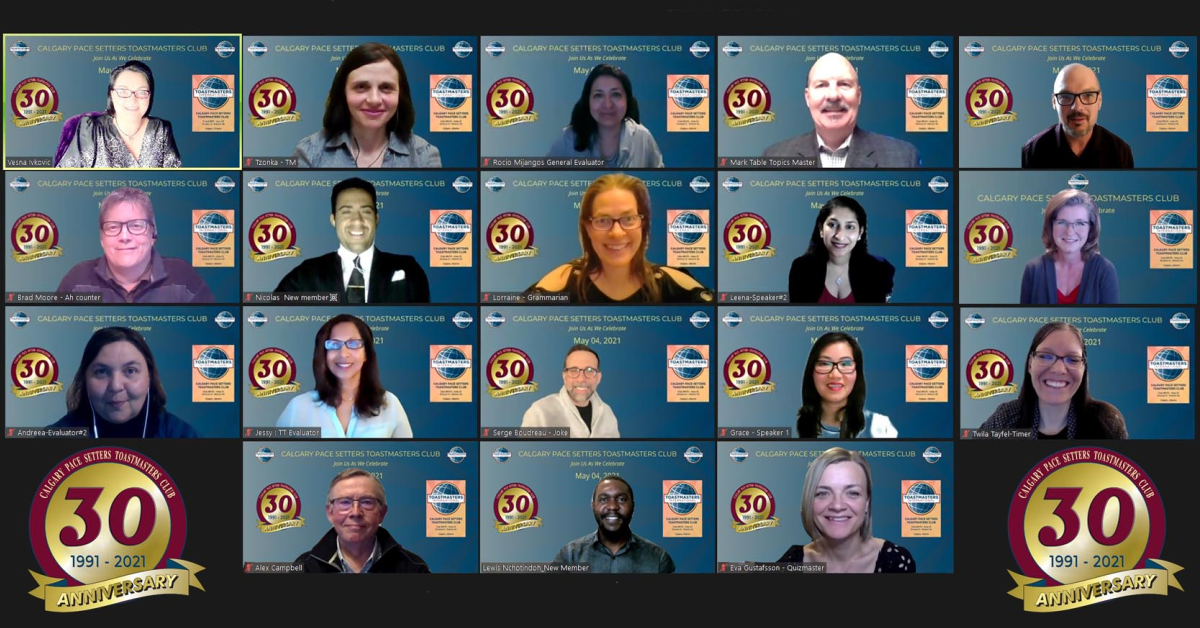 The Calgary Pace Setters Toastmasters Club celebrated its 30th anniversary on May 1, 2021. In honor of the occasion, a special meeting was held virtually on Tuesday, May 4th, 2021. Numerous current and past members along with distinguished Area, Division, and District guests attended the virtual party.

The year was 1991-a year filled with many historic moments. The USSR formally dissolved, the first-ever website (titled the World Wide Web) was launched, Silence of the Lambs won the Academy Award for best picture, becoming the first horror film to do so and Irene Murray founded the Calgary Pace Setters Toastmasters Club. Over the last 30 years, the Calgary Pace Setters has helped members develop and refine their speaking, leadership, listening, and critical thinking skills in a safe and supportive environment. Calgary Pace Setters has truly become a place “Where Leaders are Made!”  (Carson Puetz)

Jovana Ivkovic was welcomed into the Pace Setters fold in the spring of 2013. Jovana says one of her favorite things about the Pace Setters is that we always dress up for Halloween (which happens to be Jovana’s favorite holiday). Jovana also loves the club because of our amazing mentorship program and how supportive everyone is to each other.

Alex Campbell, current VP of Membership and Mentorship Coordinator, first joined Toastmasters as he was asked to be the MC at his parent’s wedding anniversary party and knew it would be a big challenge to speak in front of hundreds of people. Alex was originally a member of another club but when that club folded, he went on the lookout for a new club. He joined the Pace Setters because of Irene Murray and because the meetings had a friendly, relaxed atmosphere that made attending meetings fun. After 25+ years with the Pace Setters, Alex says that Tuesday nights are still a highlight of his week. You can watch his story in the video  HERE.

A Bit of Pace Setters History (By Alex Campbell) 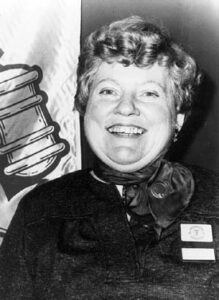 The story of the Calgary Pace Setters Toastmasters club begins with Irene Murray, our club founder. Irene originally joined Toastmasters after her husband died-she wanted to make a better living and to do so she needed to overcome her shyness and gain self-confidence. Irene decided that Toastmasters was the vehicle to do just that. In 1966, Irene became Calgary’s first female Toastmaster when she joined the Bow Valley Toastmasters, signing up using just her initials as women were not permitted into Toastmasters at the time. It wasn’t long before Irene broke this barrier and in 1973, she formed an all-female Toastmasters Club-the Golden Gavel Club. She was a very active member of Toastmasters International and her many accomplishments include: earning a DTM, competing in speech contests, winning Calgary Toastmaster of the Year in 1978, and becoming the first female District 42 governor in 1980. Irene Murray also founded over 15 clubs, including one at the Bowden Penitentiary to help rehabilitate the inmates. The Calgary Pace Setters is among those 15+ clubs and it was chartered on May 1, 1991.

Over the years of the Pace Setters’ existence, we have seen myriad changes. Amongst these changes is the fact that we have been a nomadic club. The Pace Setters first met in the Health Plus building-jammed into a tiny conference room. Fortunately, they were able to move to a Christian school and get a whole classroom for their meetings. After a while, the club had an opportunity to move to the Midlands United Church which suited their needs well. Unfortunately, the Church had to return the property to St. Mary’s College but the Pace Setters were able to get a room at the College. This move drained their bank account so again they went off searching for a home. Fortunately one of the members who worked at St. Sebastien’s School and the Pace Setters have met in the staffroom at St. Sebastien’s ever since-that is until the pandemic hit and our home has become Zoom. We are hoping we can stay at St. Sebastien when the pandemic is over.
For the full story click HERE.
The Calgary Pace Setters Club has had a number of notable accomplishments over the last 30 years. Among these accomplishments are:

Calgary Pace Setters meet every Tuesday at 19:15 p.m. virtually through Zoom. For more information about our meetings and the club, please visit www.calgarypacesetters.com

The Calgary Pace Setters have enjoyed a wonderful first 30 years. Here’s to the next 30 years!