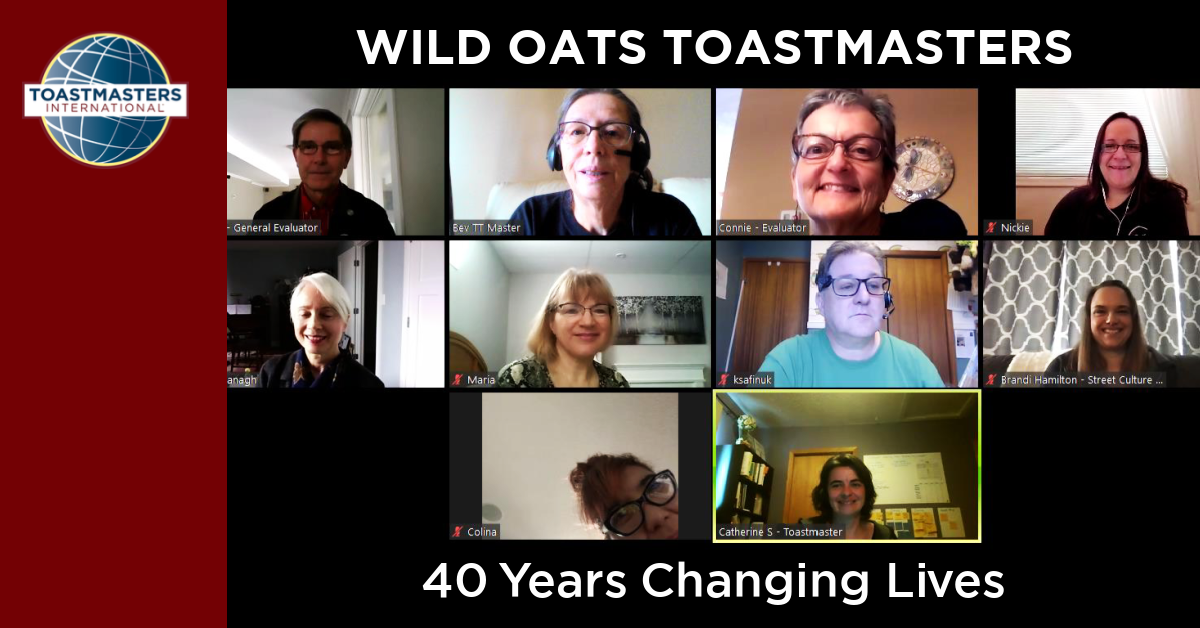 Wild Oats Toastmasters marks its 40th anniversary on March 1st. In honour of the occasion, a virtual celebration will be held on Sunday, February 28, 2021 through WebEx. We are honoured to announce Richard E. Peck, International President, Toastmasters International as our guest speaker.

“Toastmasters provides a supportive and positive environment where members have the opportunity to overcome their fear of public speaking and sharpen presentation skills,” says Catherine Secundiak, Wild Oats Toastmasters Club President. “The club enjoyed an in person experience for 39 years. In the last year, we had to transition to online. We needed to learn all the skills, and technology to facilitate and present to a virtual audience. Other benefits include the opportunity to increase one’s confidence, build critical thinking skills and become an effective listener.”

Brad Korbo, the club’s current VP Education, joined Wild Oats in 1989.  Originally he joined to be more comfortable with work presentations.  Korbo shares “I soon found there were also many great opportunities to develop my leadership skills.  I took advantage of this and served as a Past District 42 Governor.   Further, I was able to use those skills in my career and just retired from the position of Managing Director.  After 25 years as a Toastmaster, I continue to find challenges and grow.”

Wild Oats Secretary/Treasurer, Connie Paus became a Toastmaster in 1990. She says, “It is the best thing I’ve ever done to improve my overall confidence, my ability to communicate and my leadership skills. I’ve developed strong friendships with people like me, who have goals and aspirations. Toastmasters is a great organization!”

A Bit of Wild Oats History

Chartered with 20 members in 1981, Wild Oats Toastmasters is located in Toastmasters District 42. Originally and for many years club meetings were held in Saskatchewan Wheat Pool facilities. Therein lies the story behind their name.

For 40 years, the club remains dedicated to helping people become better speakers and leaders. Further Wild Oats history reveals great achievements by its members. A few are listed below.

Division B Of the Year Awards

Join Us Online For the Celebration

Members of the public, Toastmasters past and present, near and far are invited to attend the event virtually via Webex . If you are interested in attending email, Bev Ward, Wild Oats VP Public Relations @ vppr-2849@toastmastersclubs.org

Wild Oats Toastmasters meets each Monday at 12:05 p.m. CST virtually through WebEx. For more information about this event and the club, please visit www.wildoats.toastmastersclubs.org.