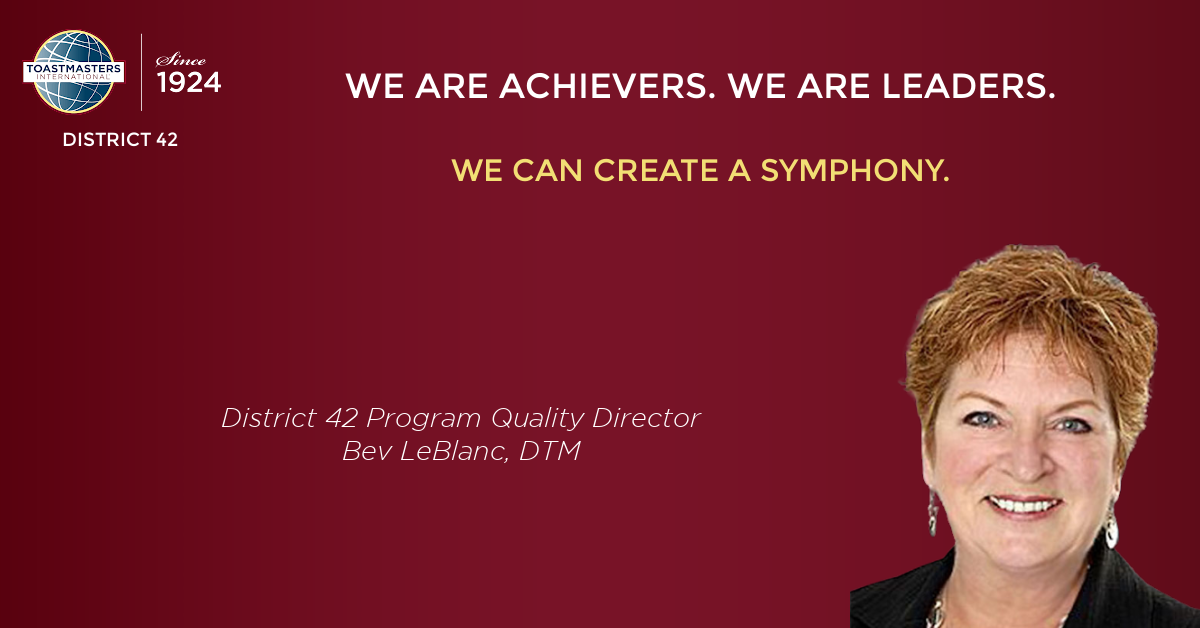 WE ARE ACHIEVERS. WE ARE LEADERS. WE CAN CREATE A SYMPHONY.

Whew! What a year we’ve had. It seems to have gone by in a blip of time, but we (the members of District 42) have accomplished some stellar achievements.  Training, contests, & various special events such as our Speaker Showcase in the fall were examples of learning, fun, & friendships taking place.  Many of us have met members from around the world (Scotland, Europe, Australia, Mexico, & many other locations) thanks to being on-line.

During this ‘break’ time of the holiday season, perhaps we have time to catch our breath, relax a bit, then contemplate where we go from here.  Perhaps you will join me in aspiring to reach even greater heights than we did last year:

What are those thoughts I imagine are bouncing around in your head?  These goals aren’t realistic.  There’s no way they can be done.  You’re out of your mind.

Here’s what I propose.  Put a hand on each side of your head & stop the bouncing.  Hold your head steady & answer these questions:

If I were to speak to each member individually I suspect the answers to the above questions would be ‘none.’ Together let’s break down the real barrier to reaching our individual & collective goals: a mindset that says it can’t be done. Yes, it can. With innovation, inspiration, & ideas.  Let’s work as a team to help each other achieve goals others believe impossible.

This is District 42.  We are achievers.  We are leaders.  We can create a symphony.