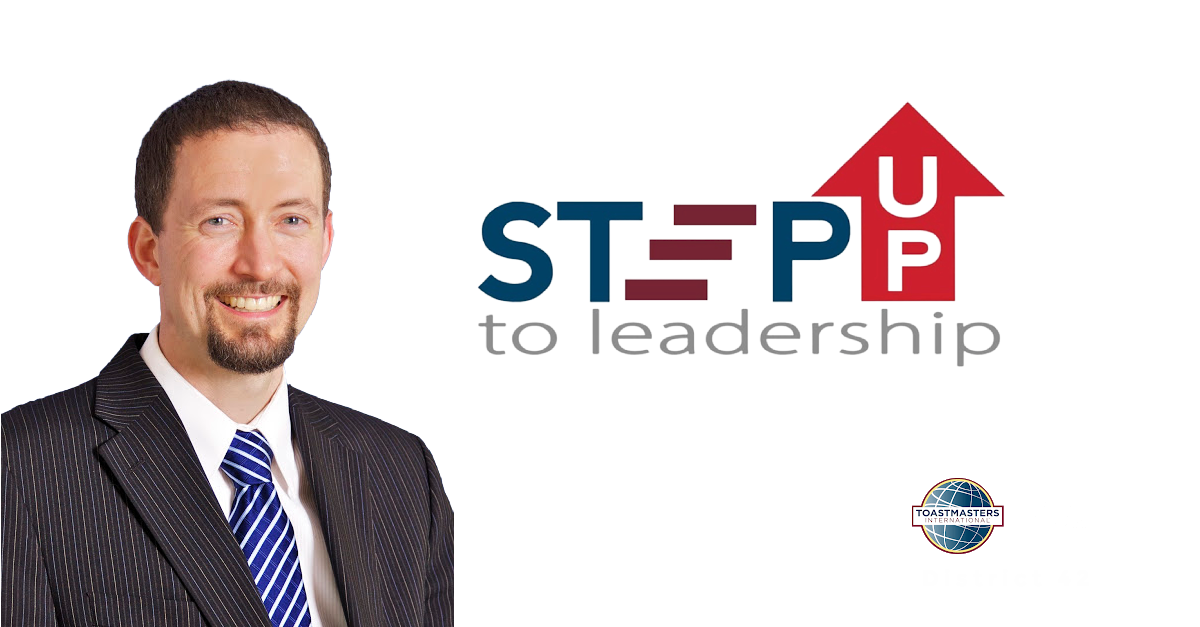 Randy Maus is the Clarity Coach at Front of the Room Leadership. Stepping up to lead, his company provides leadership training. When he started his business, he already had fifteen years of experience. But he only spoke to larger audiences a few times a year. He wanted feedback to improve consistency in his speaking and presentation performance.

Randy knew about Toastmasters from friends who were long time members. Consequently, he was aware that it was a place to improve speaking and presentation skills. As a result, he says, “I went to a Toastmasters meeting… and actually saw some of the feedback. I knew it was a place I could learn and grow.”

Randy began stepping up by setting goals to deliver a speech every two weeks and take on a meeting role between presentations. Subsequently, he noticed improvements in the first three months. He also took a speaking opportunity outside his club, volunteering as a test speaker for evaluation contests.

Randy says being a test speaker was a fantastic experience. “I was new at Toastmasters, nobody really knew me. I got asked to speak because I was more than willing to volunteer. What I really liked about being a test speaker was receiving feedback. When I did it at MVP, it was great because I had eight evaluators. And having eight evaluators it gives you a sense of what message is being taken from your speech. It gave me a different insight into how people perceive different aspects of the speech. It was absolutely a useful experience speaking in a variety of clubs.”

Therefor, thru his active participation, Randy completed the first level of Toastmasters in six months. He received a Competent Communicator (CC) Award.

Stepping up led to discovering more about Toastmasters

When he joined, Randy already had some speaking skills and knew what he wanted to accomplish. However, he was surprised by how much more he could do within Toastmasters. He says, “I would say it was like walking in the forest, and I think there’s a forest full of trees. But then I’m stumbling on to a waterfall and stumbling on to the wildlife. I’m stumbling on all these other beautiful, wonderful aspects of Toastmasters as I went. That was interesting, as well. I had no idea when I joined Toastmasters, how much more there could be to it.”

As an early member, Randy discovered extra resources provided by Toastmasters District 42. He says, “I was hearing this D42TM.org kind of thing. I really didn’t know that was our website. Then I started going to that. I was amazed at how many resources the District had put together for us. I wasn’t expecting that kind of depth and quality.”

Stepping up to challenges beyond the club

Toastmasters is a volunteer-run organization. Members get to apply the skills they learn in real leadership roles. Randy’s willingness in stepping up saw him participate in developing more resources and training for other members. He also served as an Area Director and took on positions outside his club. This practical experience was one benefit, but Randy found others.

In Randy’s words, “Yeah, I’ve made new friends for life, certainly contacts, even for business, which has been useful. It’s given me a platform and credibility with a group of people who are pretty keen as well. And it’s allowed me to do some very fun, interesting, and meaningful activities. Coach Craft, Prince of Pathways, and emceeing for the District Celebration were phenomenal. All are highlight experiences of my Toastmasters progress.”

The unique culture of the Toastmasters community

Toastmasters is a volunteer educational organization. But the aspect of members helping other members creates a unique culture.

Randy says, “I did not know Toastmasters had so many great people.

It shouldn’t have been a surprise as it’s a learning organization. In the end, it attracts people who are keen to learn and grow. And I’ve always found people who are keen to learn and grow to be interesting people.That was a very pleasant surprise for me. Having opportunities to lead others was also good for me. I’m a leader. I’ve always been a leader. I was surprised by how much joy that gave me. Connections were the biggest surprise that came out of the experience. However, I didn’t go into it for the connections, but as Gord Grant always says, ‘People come for the program, and they stay for the people.’ There’s a lot of truth to that statement.”

Randy Maus joined Toastmasters for a place to improve his existing skills, test ideas, and get feedback. He got all that, plus a place to practice leadership and build a network of friends by helping others. Currently, Randy is giving back to Toastmasters District 42 by serving as the Division C Director.